Everyone at Walker Plastic Surgery is committed to your care. Our staff has years of experience treating patients and is dedicated to our patients diverse needs. Whether you desire a facelift, rhinoplasty or breast augmentation or something non-surgical such as Botox, ELOS laser skin therapy and injectable fillers, all options will be explained to you and an individual treatment plan created.

Making our patients feel great and loving their results is what Walker Plastic Surgery is about.

Sylvie received her Bachelor of Nursing degree in France in 1982, and in the United States in 1990. She has been the nurse at Walker Plastic surgery since 2010.

Her expertise extends into the field of Plastic Surgery where she has gained extensive experience under top plastic surgeons in the United States and France.

Our patients love her professional demeanor, fund of knowledge, and compassion. Sylvie is an important member of the surgical team at Walker Plastic Surgery and is fluent in both French and English. 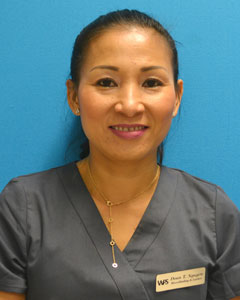 Doan has 23 years experience in Cosmetology. Originally from Vietnam, she moved to Washington, D.C. in the early ’90s and began her journey in esthetics. Currently, she is one of the highest rated estheticians in her field: She takes pride in her work and services.
Doan received her cosmetology license in 1993 from the Aspen Beauty Academy in Maryland, followed by her Esthetician License in 2000. She then began her training in Dallas, Texas to specialize and become certified in eyelash extension. In 2016, she received her certification for Microblading after attending Phi-Brows by Branco Babic. Doan is fluent in Vietnamese and English.